Early this summer, Bose AR partnered with Capitol 360 Labs, the official innovation program of Capitol Records and Universal Music. This partnership is dedicated to providing new opportunities for innovation and drive tech forward in the music industry.

More recently, the Bose Developer Relations team hosted a series of workshops, industry panels and a CodeJam in Detroit - the home of Motown label, Detroit CodeJam was the first CodeJam as part of a year-long program and partnership with Capitol360, (Universal Music Group).

The primary reason behind picking Detroit (Motown) as the destination for the first code jam was that the city is experiencing a revival of it's long-standing leadership in music and innovation with a new insurgence of growth from the music tech industry. This is a community rich with both artistic and technical talent.
Detroit provides an amazing backdrop and wonderful opportunity to showcase the city’s music legacy and pave the future of Capitol’s Motown Brand. Bose brings on innovation with products aimed to enhance Spatial Audio and AR experiences with music.
Motown’s History
Motown holds a significance in Detroit’s contribution to pop, soul, R&B music and the Civil Rights progression. The turbulent 60s was the backdrop and drive for the rise of Detroit’s Music scene. Motown became America’s original and most iconic label, showcasing many African-American artists: The Temptations, Stevie Wonder, The Supremes, The Jackson 5, and The Funk Brothers. Motown’s national success and crossover during an era where laws, job opportunities, and fundamental human rights for minorities were continuously violated, inspired black Americans to rise above their white counterparts.
Motown’s Evolution
At the beginning of the 1960s, most of Motown’s music was played in venues or radios.  Around 1963, the compact cassette changed how music was distributed and heard. However, portable music didn’t gain popularity until the 80s when the Walkman and compact disc were sought after. While these innovations in technology influenced how the music industry approached sound and its listeners, much of the experience was still flat. Music creators were able to create mixtapes and synth sounds, however, music was not personalized to the listener. The technology was not advanced enough to build integrations to these portable players that curated an experience around the listener. Up until 2000, people needed expensive equipment and a dedicated area to hear the spatial sound. Even then, the technology was not dynamic enough that permitted listeners to receive textual sounds concerning what they are doing, where they are, or how they feel.
In more recent years, this has changed. Tech companies and music labels are shifting their focus to building portable and accessible experiences that don’t require considerable money and space. Companies like Bose, Capitol Records, and Abbey Road are investing in resources to building financially accessible hardware, free software, and curating artists and developers to push a new era of how we listen and explore sound.
Detroit Code Jam - The First of a series
Bose and Capitol Records hosted a code jam in Detroit to encourage developers to challenge the current status quo of the music industry.  Attendees witnessed a panel discussion that comprised of artists and executives to tap into their decades of experience on how they see music progressing. Teams were comprised of developers, designers, and marketers that all worked together to build a mobile application that not only allows users to have an accessible way of experiencing sound but also change how artists receive revenue.
The Developer Relations team at Bose descended on Motor City for a strategic four-day long event with programming that included music industry insights, technical workshops, and a CodeJam designed to propel new ideas with the hopes of go-to-market applications that showcase Bose AR.
For Paul Riser Jr., Managing Director TechTown Detroit, the timing is just right for Detroit’s revival.

Paul Riser Jr., Managing Director TechTown Detroit demos Qast
The CodeJam was designed to enable the rapid innovation of ideas in music tech.  Developers joined in to code and deliver a minimum viable product (MVP) over just a few days, then had the opportunity to demo their efforts.  Delivering the MVP was the first step of their idea validation. All teams were encouraged to continue developing their projects into full-featured applications.
Capitol360 and the Bose Developer Relations team helped guide each team through an incubation period with workshops on finance, music licensing, and technical mentorship.
For some developers who participated, the experience of putting their ideas to the whiteboard and being mentored by professional software developers was a game-changer. 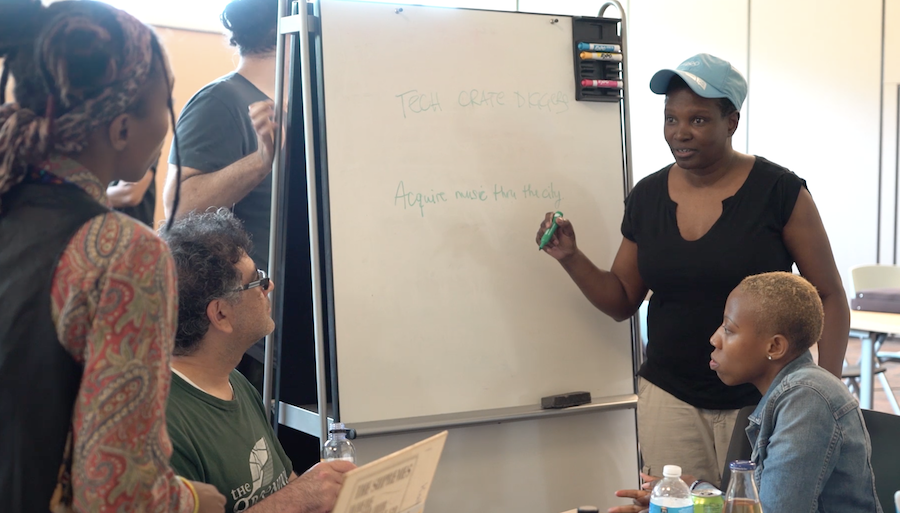 Our efforts to drive innovation in music with technology will continue with more Code Jams this year. Follow along on developer.bose.com/events and be a part of the next Code Jam.
Together, we will find a way to drive tech forward in the music industry!
Keywords:
Music Bose AR Spatial Audio Innovation Motown developers codejam artists